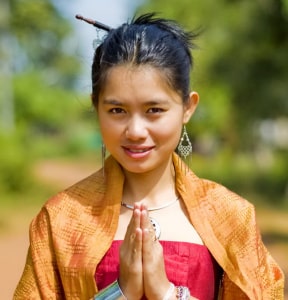 Etiquette in Thailand .People come to Thailand for a wide range of reasons. Some people come because of their jobs whilst others are looking to find a Thai girlfriend. Whatever your reason for coming to Thailand, you should be aware of the different customs and traditions as they will be very different from those that you are used to backing in your ‘home’ country.

The background – losing face in Thailand

‘Losing face’ is probably a term that you have heard quite a lot if you have been in Thailand for any length of time. This is part of Asian culture rather than just Thai but means that you should never lose your temper in public, behave in a manner that may be deemed confrontational or be overly affectionate with your Thai girlfriend.

There is very much a social hierarchy in Asia. The old always command respect from those who are younger than them and those who have been on to higher education will also get greater respect. If you Thai girlfriend tends to wear revealing clothes then this will be frowned upon and her place in the social hierarchy will be lower. There is a time and a place to dress like that and back in the village is certainly not the place!

What is the Thai greeting for hello?

The standard Thai greeting is: sawasdee (sounds like: “sah-wah-dee”) followed by the appropriate finishing participle to make it polite. Because the Thai language has its own script, romanized transliterations vary, but the greetings sound as written below: Men say hello with: sah wah dee khrap

The Wai is a traditional greeting in many parts of Asia and that is certainly the case in Thailand. This involves putting the palms of the hands together and performing a small bow of the head. The Wai should be performed by someone of lower social status, for example, by a child to an adult or ANYONE to a monk. Your Thai girlfriend can guide you regarding when to Wai.

Is it rude to point in Thailand ?

Don’t point: Pointing at someone is considered rude in many cultures but particularly so in Thailand. If you must indicate a person, do so by lifting your chin in their direction.

Showing the sole of your foot is also a big no-no. The feet are a sensitive area so be careful what you do with them! Movements that are natural in western cultures can cause great offense in Thailand. Never put your feet on a table or point with the foot. Also, keep your feet below anyone’s head at all times unless it is for medical purposes.

What do you wear to a Thai temple?

What’s appropriate clothing for Thai temples? The basic rule is to cover your shoulders and knees (both sexes), and ideally you’d cover your ankles too. On the bottom, wear longer shorts, capris, pants/trousers or a knee-length-or-longer skirt. On top, choose any shirt that fully covers your shoulders.

The Thai national anthem is played every day at 8am and 6pm. Wherever you are, you will be required to stop in silence until the anthem has finished. The Royal family are highly revered in Thailand so not observing the anthem is a sign of disrespect. If you and your Thai girlfriend go to the cinema, the anthem will be played before the film where once again you will be expected to stand in silence.

Should I tip in Thailand?

Tipping is NOT customary in Thailand, there is absolutely NO mandatory requirement to tip anyone, but small gratuities for great service are very much appreciated.In most restaurants it is customary to leave behind any loose change in coins as a tip, but everything is up to you as they say !

In the future – Do’s & don’ts in Thailand