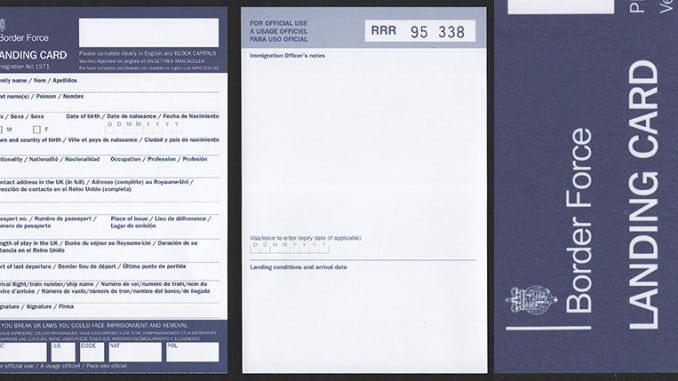 UK international landing cards to be scrapped. As of 20 May 2019, all international visitors entering the UK will no longer be required to fill in a landing card. This something that has been welcomed by many tourists coming to the UK including many Thai girlfriends but a key union believes that it will threaten the UK’s borders.

UK international landing cards to be scrapped – will this threaten national security?

It was largely reported that plans were already in place to crap the need for landing cards for visitors coming to the UK from seven countries in June 2019. However, that has now been extended with the Home Office opting to remove the requirement for landing cards for all visitors, according to leaked documents that were reported in The Independent newspaper.

There are currently around 11 million landing cards issued each year although the Home Office has informed all Border Force staff that “there will no longer be a requirement for any passenger, of any nationality, to complete a landing card” as of 20 May this year. It is believed that the goal is to reduce the delays that tourists experience when entering the UK at Passport Control and Border Force director general Paul Lincoln stated this in a letter to all staff.

Lincoln believes that this will free up more time for frontline officers to be able to focus both their time and attention on addressing more serious security threats and on “cohorts who present the greatest risk of immigration abuse.” This is something that was welcomed in many quarters within the Home Office with most of the information from landing cards being available digitally.

However, the move was less warmly received by unions who fear that the UK’s borders will come under greater threat

“The ISU is very disappointed that this measure was introduced so suddenly and without the technological support staff that had been promised,” Immigration Service Union (ISU) professional officer Lucy Moreton told The Independent.

“Although we were aware this was a measure Home Office was working towards when the new Border IT system is rolled out, for which there is no date, there was no hint that it would be introduced so suddenly and without technological support. “This is not taking back control of our borders. This is further weakening them.”

Ms. Morton readily accepts that the vast majority of the information collated from landing cards is used merely for statistical purpose, however, in a small number of cases; the information from the landing cards forms an important way of recording some incidents that may be required at a later date by UKVI or other government agencies. For further information read what the BBC have to say about landing cards.